Meet Melissa, co-organizer of Chicago's (the world's?) first Poutine Fest. In the episode, Melissa gets us up to speed on the world of poutine, talks about building a festival from scratch, shares her favorite Italian joint in the city, gripes about the less-than-immediate "immediately following" trains and learns a little bit about our old friends, the Chicago Seven.

The festival is already sold out but Stefania will be on the scene reporting on all the deliciousness, so be sure to stay tuned to the Your Chicago twitter.

Want to share a Chicago secret? Want to lodge a complaint on Listen Up Chicago? Write to us at yourchicagopodcast@gmail.com or call 773-234-5573


Podcast Powered By Podbean
at 5:00 AM 0 comments


Meet Melinda, co-author and co-producer of Solo in the 2nd City, a bi-monthly reading series and blog on the wonderful world of dating in Chicago. In this episode, Melinda talks about starting Solo in the 2nd City, shares dating tips and trends (be bold, listeners!), encourages all of us to breakout of our neighborhood ruts and gives us the low down on story telling performances around the city. 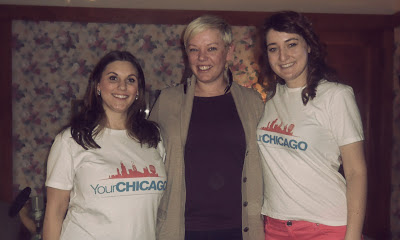 Be sure to check out their one year anniversary party at the Beauty Bar on Wednesday, February 13.

Want to share a Chicago secret? Want to lodge a complaint on Listen Up Chicago? Write to us at yourchicagopodcast@gmail.com or call 773-234-5573


Podcast Powered By Podbean
at 5:00 AM 0 comments